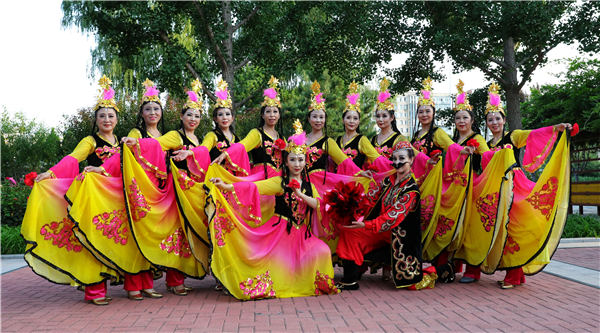 Amateur dancer Chen Wenli (left in front row), 52, spends her own money learning from professional dancers, and she teaches what she has learned to the members of her troupe. [For China Daily/Hou Shiping]

Amateur dancer Chen Wenli, 52, has benefited both physically and spiritually from dedication to her dance troupe. It is her commitment to organizing and leading her troupe through various competitions, she said, and finally winning awards and prestige for the dancers that has given added meaning to her life.

When she was working as a statistician at a refrigeration plant after high school in Beijing in 1987, Chen never imagined that she would one day become obsessed with dancing.

She also worked as a model for an advertising company after the plant went bankrupt in 1990. She suffered a bone fracture during pregnancy in 1996, which had made it impossible for her to do any exercise, and as a result she started to put on weight after giving birth to her son. She decided that she must lose it.

She started to do aerobics in a fitness center, her first contact with dance, which she said, along with her experience as a model, had prepared her for the position she would enthusiastically take as the head of an amateur dancing troupe.

Fate also intervened in the form of cancer. She underwent surgery to remove her ovaries because of cancer, and a tumor in her mouth was taken out in 2009. She put on weight again after the operations, and developed depression. As a divorcee, the heavy load on her to take care of her son and her aged parents was a burden that was difficult to deal with.

"I know that I must lift myself out of the depression," Chen said. Her experience of once working as a self-employed restaurant owner, clothes seller and other odd jobs helped her develop the perseverance and strong will to overcome any difficulty.

She joined the elderly women who would square dance every day in the Haidian District residential compound, where she had just moved into. She became obsessed with dance, lost weight and developed a positive attitude.

When many of her fellow dancers expressed their desire to learn more complicated routines, Chen organized them into a troupe.

Chen was made the head, which meant the responsibility of teaching new dances, buying costumes, choreographing and doing chores that were necessary to make the troupe successful.

Chen spent her own money learning from professional dancers, and then she taught what she had learned to the members of her troupe. She found theaters for them to use free of charge, and also sought opportunities for her troupe to give performances. 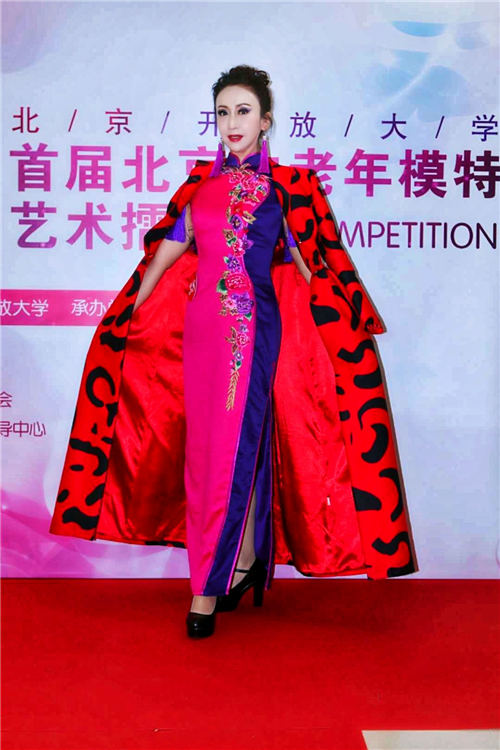 Chen Wenli also works as a model for an advertising company. [For China Daily/Hou Shiping]

When one member, Wen Jie, contracted lung cancer, all the troupe members came to her help encouraging her to continue to participate in dancing activities and even perform on stage. With all the troupe's activities including traveling to scenic spots diverting her attention from her illness and keeping her in high spirits, Wen lived for five years, three more than the doctor had initially predicted.

The troupe visited Taiwan in 2015, 2016 and 2018 to stage performances there. They also participated in performances in rural areas, which Chen and her members consider as a social responsibility. Her troupe has also staged performances at a number of nursing homes.

The troupe has won more than 30 prizes including a national dancing competition.

Many of the troupe have obtained certificates of model instructors and dancing teachers, which mean they can teach dance.

Chen is often invited to give lectures to senior residents about modeling or dance.

Organizing shows, bringing in new members as some dancers retire, arranging costumes and generally being there for everyone can be time consuming but the rewards are apparent.

Energy-consuming as her work is, Chen feels a sense of gratitude as her troupe is ranked as one the nation's best.

Chen believes that how one looks at oneself is more important than how others look at you. What her troupe members have done in the past more than a decade, psychologically speaking, is to convince themselves that they can conquer the perceptions of others.

"Don't call us 'grandma,' call us 'goddess'" is the motto Chen uses to encourage her troupe members, whom she usually addresses as "elder sisters".

Apart from contributing to society, Chen considers what they do as a way to break the traditional impression of what senior women in their 60s or even 70s are supposed to be.

When many told her that they do not look like as old as they actually are, Chen believes that they have succeeded in transcending both the physical and psychological.

Please understand that womenofchina.cn,a non-profit, information-communication website, cannot reach every writer before using articles and images. For copyright issues, please contact us by emailing: website@womenofchina.cn. The articles published and opinions expressed on this website represent the opinions of writers and are not necessarily shared by womenofchina.cn.?